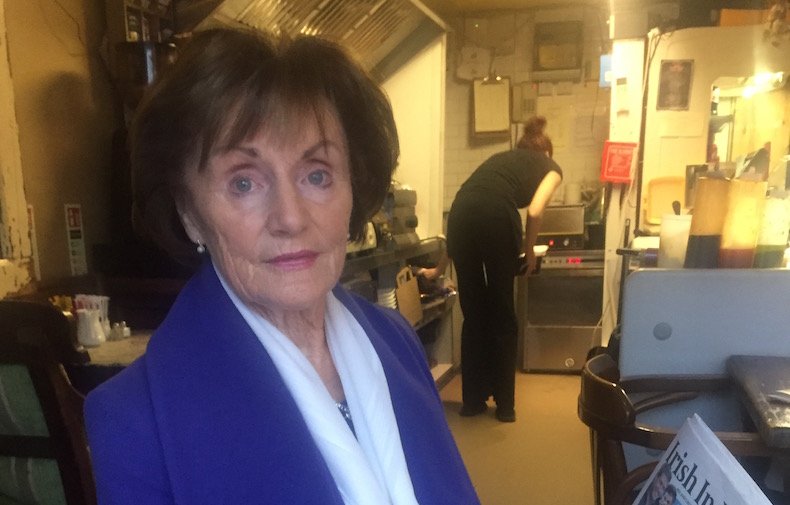 Marie Bradley, Blackrock, Co Dublin was looking for a volunteering opportunity when she heard a radio interview describing Failte Isteach, Third Age’s award winning programme that welcomes migrants through free classes in conversational English. Marie had run a successful family business with her husband, then spent some years working in administration and reception in a medical facility, and still felt ready for pastures new:  “I like to be busy, I heard about Failte Isteach, and felt this was something I could contribute to”, she says.

She observed with the Failte Isteach Dun Laoghaire group for a few weeks in summer 2015, and joined formally when term started in September. The large group has rooms in Dunlaoghaire public library, classes run one night a week from 5.45-7.45pm, and Marie has tutored students from Poland, Czech Republic, Spain, Brazil, Malaysia and more. She speaks with understanding and affection for them all. It is obvious she takes their concerns as well as their language needs to heart.

How do the classes work?  “We have books and teaching materials. I ask each new student if they would like to learn with the book or if they prefer conversation. Almost all want to talk, they want conversational English, and that seems the most enjoyable way for them to learn.  I may ask about their family, their life.  I would not correct for the first few weeks, just let the language flow to build up their confidence. After that, I would correct them if I need to, I might write out words for them, and they would copy them phonetically.  It is important that I speak simply and clearly, though every week I come with new words for them. If they don’t understand, they look these up on their Iphone – the aim is to build up their vocabulary week on week.

“With regular students, I ask what they have been doing for the past week, how they spent the weekend.  It’s two way, I tell them what I have been doing too. One student is very interested in music, another likes walking, and we discuss this.  Sometimes we might have seen the same film and we can talk about this too,” she says.

Marie says some of her students are highly qualified and would have held skilled jobs in their own country. In Ireland, they work typically in menial occupations. She feels greater language proficiency would open doors here to more opportunity, and she has witnessed where improved language skills has been the passport to a better career. She know at first hand the accommodation difficulties many experience, and has successfully encouraged a number to look for a better landlord or less crowded apartment. “Many work long hours, and they are often very tired when they come to class. I really admire them for making the effort, though I feel if you have a good education – which many of them have – then you appreciate the value of learning,”, she says. She worries too that many are lonely, and feels that Failte Isteach offers friendship and warmth. “Many migrants adopt their name to suit an Irish pronunciation. I like to learn their own name and call them by it. It seems important.  Also, if we meet outside, which can happen, I would always spend time talking and listening. At the end, I sometimes say, ‘do you realise we conducted that conversation entirely in English!”.

She loves her work with Failte Isteach and says she has learnt a lot. “I have learnt a lot about other countries and about their customs”, she says. Has she learnt anything about herself? “I’ve learnt to be patient and to go at their pace. Sometimes you feel you have explained something and they’ve got it, and then you realise you need to go over it again. And that is fine. It is whatever helps them best to learn”.

Marie is a mother of three adult children and a grandmother of nine. With her husband, she enjoys dancing, walking, theatre, and has a busy and active social life. She does not believe the students experience racism, though accepts this is a fact of life in Ireland. She would like the government to recognise the value of English classes in helping to integrate migrants and improving their quality of life here. “I also feel the migrants themselves should be much more valued. They have so much to offer our country, in terms of their experience, skills and attitudes.  We can learn a lot from them,” she says.

Find out more about volunteering with Failte Isteach